From Ireland to the Skagit ValleyOver 200 years of potato farming tradition.

Wallace Farms is located in the Skagit Valley in northwest Washington State. Nestled between Puget Sound and the Cascade Mountain Range, the Skagit Valley boasts temperate maritime climate and  rich soil. Known nationwide for its unique growing climate, Skagit Valley ecology is truly perfect for the cultivation of flavorful and beautiful red, white and gold potatoes.

Unlike in southern growing environments where high soil temperatures will literally bake potatoes if they are left in the ground, potatoes grown in the Skagit Valley may rest in the cool moist soil until harvest.

Our forefathers sensed this when they first moved here from Ireland. And we know it today. The Skagit Valley growing climate is truly unique: its soil, its temperature and its plentiful rainfall work together to produce a superior growing climate for potatoes, naturally.

Spuds in our blood

Since 1903 the Wallace family has been growing potatoes in one of the world's finest potato growing regions - the Skagit Valley of Washington State.

Brothers George and Dick Wallace began farming together in the early 1950s. They began farming together on the same land farmed by their father Robert and uncles George and Tom. George, Tom and Robert (together with their parents and several brothers and sisters) had settled in Burlington after immigrating from Ireland in 1890. George and Dick were ambitious and hard working. They started with just 14 acres but gradually bought family land from siblings and uncles, and from other neighboring farms, all while each pursued a career outside of farming. Dick was employed at Texaco while George owned a local insurance agency and accounting firm. In the mid-1980s George and Dick were joined by Dick's son Tim and George's son Norm following college. In 1994 Jack returned to the farm. 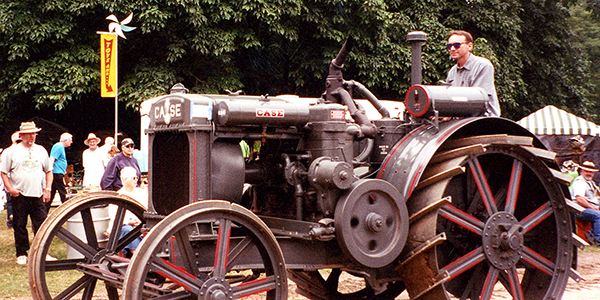 Norm Wallace driving a 1927 J.I. Case Model 2545 cross-mount tractor which he restored in 1995. This tractor was bought new by Wallace Farms.

During the 1980s and 1990s the farm continued to grow and to advance with greater mechanization and automation. In 2000, a new packinghouse was added to create a modern production space that would streamline processes and facilitate food safety efforts. In 2002, a new cold storage was built at the same site together with a new office building.

The Wallace's potato farm in Ireland was located in a small village called "Ardtrasna" which was located near the Atlantic coast in County Sligo.

Ardtrasna, Ireland, home to the Wallace's original potato farm. The family farmed in Ardtrasna since before 1730.

The family had farmed in Ardtrasna since as early as 1730, and their homestead is still referred to as the "Wallace Farm" by the current farmer - a descendant man the family sold to in 1890. The move to America by George and Dick's grandparents James and Marion and their 11 children was driven by a desire for greater economic freedom and opportunity. 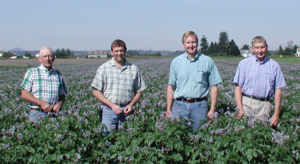